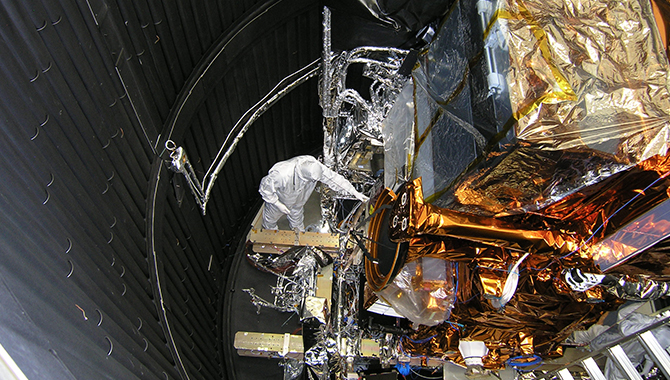 Following the 2017 hurricane season, NASA and NOAA continue their efforts to improve extended weather forecasting abilities with the launch of a next-generation remote-sensing satellite.

The partnership between NASA and the National Oceanic and Atmospheric Administration (NOAA) recently launched the first in a new series of advanced polar-orbiting weather satellites: Joint Polar Satellite System 1 (JPSS-1). JPSS-1—which reached orbit on November 18, 2017, and is now known as NOAA-20—is a next-generation weather satellite designed to enhance the timeliness and accuracy of weather forecasts as much as seven days in advance. JPSS-1 will enhance capabilities for severe weather prediction and monitoring, helping weather professionals and emergency personnel better assess such events as hurricanes, tornadoes, blizzards, volcanic eruptions, and forest fires.

The new satellite joins NOAA’s existing polar-orbiting satellite, Suomi National Polar-orbiting Partnership (NPP), which became operational in 2012. While the official life span of Suomi NPP is five years, the satellite will remain operational as long as possible. Once it expires, JPSS-1 will continue to operate on its own. It is expected to last seven years, at which point it will be replaced by JPSS-2, the next satellite in the series. The JPSS program, which includes four satellites in total, is expected to run through 2038.

JPSS-1 and Suomi NPP will follow similar paths, although JPSS-1 will download data over both the Arctic and Antarctic, while Suomi NPP only shares its information with a ground station in the Arctic. Together, they will complement the work done by NOAA’s Geostationary Operational Environmental Satellite (GOES) constellation. The two types of satellites, polar-orbiting and geostationary, operate quite differently. While JPSS-1 travels around the globe multiple times each day from a vantage point of 512 miles above Earth, GOES monitors the Western Hemisphere exclusively. The constellation orbits Earth in fixed locations, continuously observing the same parts of the globe from roughly 22,400 miles above the equator.

Altogether, the new JPSS program and the GOES constellation are designed to provide high-quality data to enable accurate forecasts in order to help save lives, protect property, and enhance emergency managers’ ability to respond both before severe weather events and in their aftermath.

JPSS-1 is a product of the long-standing partnership between NASA and NOAA. The agencies oversee the development, launch, test, and operations of all satellites in the JPSS program. NOAA funds and manages the program, operations, and data products. NASA develops and builds the instruments, spacecraft, and ground systems, and launches the satellites.

Watch this NOAA video to find out more about JPSS.

Learn about CYGNSS, a novel hurricane-tracking initiative from NASA, in this APPEL News article.