Back to Top
Home/INSIGHT/Perseverance’s ‘Tantalizing Suite of Rocks’ 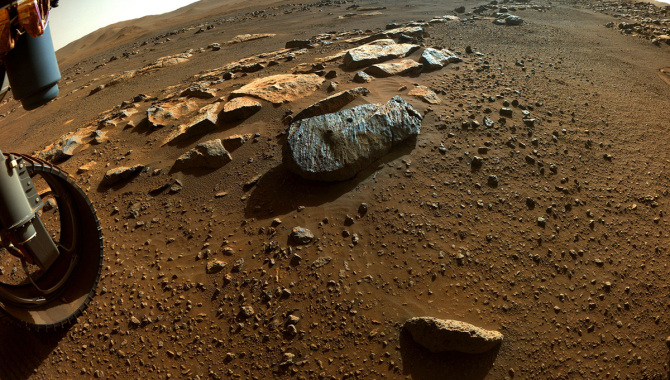 A rock on Mars with two holes where the rover's drill obtained chalk-size samples. The rover’s Delta Campaign has collected samples that scientists are eager to examine in laboratories on Earth.
Credit: NASA/JPL-Caltech

Early morning at Jezero Crater and NASA’s Perseverance Rover is quiet, awaiting the next series of commands to travel the millions of miles from Earth and guide it through another day on Mars. It’s September 15, 2022 on Earth—Sol 559 of the mission on Mars. Perseverance has traveled more than 8 miles in the last 18 months, moving in small increments, examining some of the most intriguing geology in the solar system.

Jezero crater was identified in 2007, when researchers at Brown University were examining images of the Martian surface for evidence of sites that might have once been open-basin lakes in the planet’s distant past. Jezero Crater not only shows evidence of that, it also includes a large delta, rich in clay and carbonate deposits, ideal for preserving fossils and organic matter. 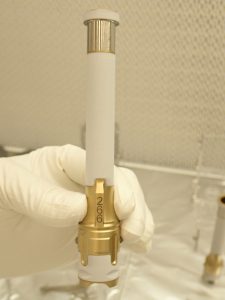 This image, taken in a clean room at NASA’s Jet Propulsion Laboratory, shows sample tube number 266, which was used to collect the first sample of Martian rock by NASA’s Perseverance rover.
Credit: NASA/JPL-Caltech

Perseverance is similar to NASA’s Curiosity rover, which has been operating on Mars for more than a decade. Perseverance is about 10 feet long and 9 feet wide. It stands 7 feet tall and is equipped with new technology that enables it to travel much faster over difficult terrain and to autonomously avoid hazards. It carries a suite of sophisticated instruments to examine the mineralogy and geologic structure of Mars while searching for organic compounds. These instruments include SHERLOC, the first ultraviolet Raman spectrometer on Mars and a sampling arm for collecting rock and soil samples of high scientific value. Two samples are collected from each rock and sealed in tubes that NASA has partnered with the European Space Agency to bring to Earth in the Mars Sample Return Campaign.

The Perseverance team began by exploring the crater floor, which immediately yielded surprises.

“…What we found is not what we expected to find,” said Ken Farley, Perseverance Project Scientist, speaking at a September 15 NASA press conference where the team recapped the impressive scientific samples Perseverance has already collected. “Many of us expected to find, out there in the middle of this crater that once held a lake, … sedimentary rocks deposited in that lake. And instead, what we found is igneous rocks. … So that suggests a history that is more complicated than we expected.”

Because many of the dynamic forces that reshape Earth’s surface are absent on Mars, geological features persist much longer there, noted Rick Welch, Perseverance deputy project manager, JPL, speaking at the NASA press conference. “…There may have been multiple iterations of lake. The lake might have filled and dried up, and then there might have been magmatism filling it up with lava and then more lake. So, all we can really say is that there is evidence that there are igneous rocks that are older than the final iteration of the lake that … made the delta. What happened before that we don’t know, but it’s basically a time history, at the bottom of which we see the igneous rocks and then the upper part of which is the delta. That is the last iteration of the lake.”

“This amazing rover has collected a really tantalizing suite of rocks…”

In April, Perseverance began exploring the Delta Front, where the rover collected samples from two rocks, about 20 meters apart. The first rock, named Skinner Ridge, is a fine- to medium-grained sandstone with a diverse mixture of lithologies. Scientists believe this rock could have been carried by water for hundreds of kilometers before being deposited in Jezero crater.

The second, named Wildcat Ridge, is a fine-grained sulfate bearing mudstone that also contains clays. Scientists see evidence that this rock formed in salty water, possibly during a time when the lake was evaporating, according to David Shuster, Perseverance returned sample scientist, University of California, Berkeley.

“So, at some point, the lake filled up with water and as that evaporated, it appears that this rock … formed. [It] is really important that this has sulfate in it, and also clays, because that means that this rock has high potential for biosignature preservation. Meaning that if there were biosignatures in this vicinity when that rock formed, this is precisely the type of material that will preserve that for us to study when [the samples] come back to Earth,” Shuster said.

“…Both of these rocks are composed of sediments that were transported by liquid water. They were both deposited into a lake and then they subsequently experienced aqueous alterations—alterations also involving water and cementation after deposition. Thus, these rocks formed in, and record, conditions of a habitable environment,” he added.

This fall, Perseverance will explore an area known as Enchanted Lake. Samples gathered there will bring the rover’s total to 20 filled and sealed tubes of the 43 tubes the rover carries. At that point, the team will establish a cache depot on the surface, placing the duplicate tubes where they can be gathered later by Ingenuity-class helicopters.

As a 10-year-old girl, Dr. Laurie Leshin, who is now the director of NASA’s Jet Propulsion Laboratory, was  riveted by the first images from the surface of Mars, sent by NASA’s Viking landers. “As someone who’s been working towards Mars Sample Return for frankly, a couple of decades, to say that I’m thrilled with where we stand today, it would be a huge understatement,” Leshin said, noting that if these samples were analyzed in sophisticated laboratories on Earth, they could yield answers to “some of the biggest questions that we as scientists can ask.”