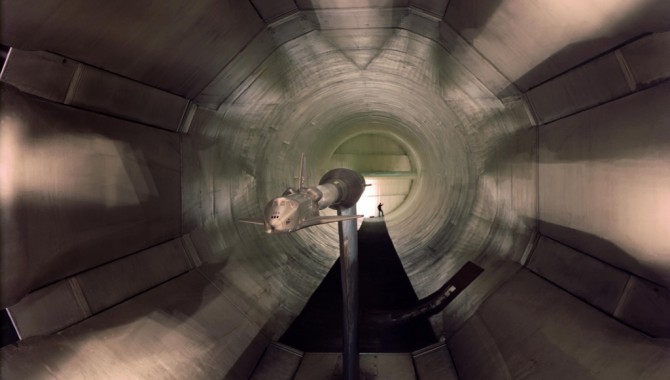 On April 12, 1981, they sat in the Reid Conference Center at Langley Research Center and watched the first Space Shuttle launch on television, just like everybody else. 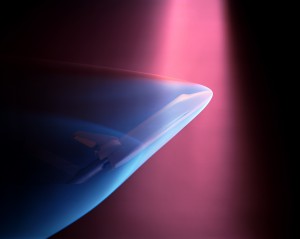 A Space Shuttle model undergoes a wind-tunnel test in 1975. This test simulated the ionized gasses that surround a shuttle as it reenters the atmosphere.
Photo Credit: NASA Langley Research Center

“You were thinking of all of the things you could still be doing to it if you had the time and money,” said Dick Powell, who worked on the shuttle’s flight-control system as an engineer fresh out of Virginia Tech and remembered that, with shuttle, “the first thing you learned was that everything you learned in school was about thirty years out of date.”

Powell and others in flight control had taken aerodynamic data provided by George Ware, Delma Freeman, and a team who tested a host of designs and derivatives in a dozen different Langley wind tunnels. With the shuttle on the launchpad at Kennedy Space Center that day, Ware was wondering about the tests and about a meeting with the data verification committee.

“There was a parameter that they were unsure of because it had some variation,” Ware said. “We got a Rockwell guy and me in the hall to hash it out, and we came back with an answer.

“Now, that’s not a big deal, but it shows you why you might wonder: Did we make a mistake? We took a straight edge and drew a line and figured out the slope and that was the number we gave Dick for the controls. Did I do it right? Is that number right?”

Paul Holloway, later to become Langley’s center director, wondered about a project he had worked on since its inception as a member of NASA’s Space Shuttle Task Force. And he considered the time Langley invested in the project. “At its peak, Langley had 350 people, 350 man-years of effort at the completion of Phase B, in ’76,” he said.

That effort began with the formation of the Space Directorate at Langley in 1970. A Vehicle Analysis Branch was spun up, with volunteers brought over from Langley’s full-scale wind tunnel. They were given concepts to test by Johnson Space Center, which was still running the Apollo program at the time, only a year after Neil Armstrong first walked on the moon.

“Essentially, we had four configurations using a straightwinged orbiter and a straight-winged booster,” Ware said.

The orbiter looked like a fighter airplane, and power was going to be used to land. Ware and the group tested to determine what they already suspected: a straight-winged configuration wouldn’t work.

“With a straight wing, flow doesn’t become attached to both wings at the same time,” Ware said. “One of the wings attaches first, and it flips over and will crash.”

More configurations were tried, with wings swept back. Then a contractor suggested that the orbiter be boosted into space with a solid-fuel rocket and become a glider during descent. Rockwell gave it a try with a model that approached today’s 81-degree sweep, tapering to 50 degrees.

“They had estimated aerodynamic data, and it was our job to validate that data,” Ware said. “In a month, we ran a full set of data across a wide speed range and got the information to Headquarters. We said, yes, with a few caveats, it will work.”

Along the way, several adjustments had to be made in the thought process. “Changing directions with a program this big was like trying to steer an elephant,” Ware said. 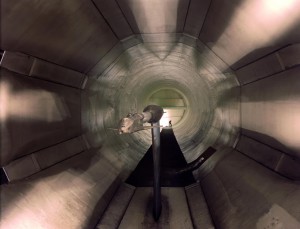 One adjustment required the engineers to consider just what they were building: a flying truck.

“The shuttle’s job was to carry a payload into orbit,” Ware said. “It wasn’t designed to fly anything like an airplane. It was to survive the return to Earth and land.”

It was to become the first craft to do so under digital control from hypersonic speeds in space.

“There were a number of things we could have done to improve the flyability, but this was what they wanted,” Ware said. “The clock was running and the dollars were flying out.”

Once the shape of the shuttle orbiter was determined, the tests accelerated. Every flight-control configuration demanded testing.

“Shuttle had to rewrite a lot of textbooks,” Powell said. “It was the first digitally controlled aircraft and it was directionally unstable.”

Where airplanes had ailerons on their wings and elevators on their tails, shuttle had “elevons”—combinations of the two on the single big wing.

“It had never been done before, so we had to design a control system to do that.”

Then, too, there was a body flap to deflect gasses from the engines used to help the orbiter in its ascent. In reality, the shuttle has fewer control mechanisms than any airplane. But what was asked of the controls made the process more complex.

Imagine going to the direct or of spaceflight, who was John Young, and telling him we wanted to drill holes in the carbon-carbon nose But we did prove analytically and through tests that you could do it, and we did it.

“The issue there is that the center of pressure, where the forces are acting, moves from hypersonic to subsonic,” Powell said. “So the trick is to design a vehicle to be controlled through all of these readings. Hence the flight mechanics issues.”

Each of those control ideas was tested by Ware and the wind-tunnel engineers. They also inherited another problem when it was found that tiles attached to the shuttle for heat protection were falling off.

“They were testing in the 8-foot pressure tunnel, using the bonding system they had for shuttle,” Holloway said. “They were testing to see how strong the bond was. If a tile got loose and several tiles came off behind it, it was called the zipper effect, and it terrified everybody associated with the program.”

There also were problems to work out with expansion of the aluminum skin of the shuttle orbiter during the heat of reentry. There was fear that that expansion would cause tiles to pop off the vehicle. That, and problems with the engines, deflected scrutiny from other issues.

“Flight mechanics was having troubles, too,” said Powell. “But the other two took the brunt of the arrows.”

Though Johnson Space Center oversaw the shuttle project and developed flight-mechanics algorithms, Powell and Larry Rowell built a simulator at Langley at the behest of aerothermodynamics chief Gene Love.

“We found an old airplane cockpit and refitted it with an old Apollo hand stick and some CRT displays,” Powell said. “It was like an old golf cart, and we could roll it up to a computer console to run tests. 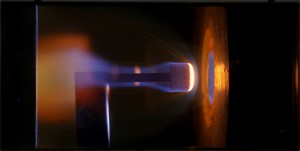 Above: The high temperatures that were to be encountered by the Space Shuttle were simulated in the
tunnels at Langley in this 1975 test of the thermal insulation materials that were used on the orbiter.
Photo Credit: NASA Langley Research Center

“It helped that we were single,” he added. “Computer time was scarce then, but computer time at night wasn’t scarce. We would work nights, weekends, whatever.”

And with their cobbled-together machinery, they uncovered a problem with the shuttle’s rudder aerodynamics that called for the flight-control system to be redone.

As aerodynamic questions were answered, more were posed. When Langley’s Jim Donovan wanted to put a camera in the tail of Columbia to shoot infrared video over the wing, it took more tests to determine that it wouldn’t affect the shuttle’s handling.

“The camera showed that part of the shuttle was overengineered,” Holloway said. “That was weight, and weight was payload.”

When Langley’s Paul Siemers wanted to install pressure caps in the nose of the shuttle to determine the flow field, there was more consternation.

“Imagine going to the director of spaceflight, who was John Young, and telling him we wanted to drill holes in the carbon-carbon nose,” Holloway said, laughing. “You can imagine what the welcome was. But we did prove analytically and through tests that you could do it, and we did it.”

Data still comes from those sensors.

Each change generated more tests. From 1970 to 1982, 52,900 hours of wind-tunnel time were used on shuttle at Langley. On that April day in 1981, Ware, Powell, and others sat in the Reid Center and wondered if it was enough. The shuttle went aloft and came back safely in the first of what would be four test flights. But it was hardly routine. Nothing about shuttle has ever been routine.

“This was nothing like anything we’d ever done before,” said Freeman. “It wasn’t like an airplane. An airplane, you’d send it out to a boundary, get it back, then send it out again at a different boundary. We had to get this right the first time.”

They got most of it right—enough to get the shuttle back safely. But before it could go out again, lessons learned from the first flight had to be applied.

“I think George Ware had wind-tunnel models ready to go,” said Powell of the moments after the shuttle landed safely, much to everyone’s relief. Data was quickly disseminated, and everyone learned how serious some of the problems were.

“You could see that every discipline had something to work on,” Powell said.

Flight control had misjudged the effect firing the thrusters on the aero Reaction Control System had on the orbiter’s aerodynamic flow field. The effect of the body flap on reentry demanded another look. The shuttle didn’t fly the predicted ascent profile.

“If you look at the shuttle, with all of the work on it, we had at least four things that could have led to the loss of the vehicle in that first flight,” Powell said.

Seven months later, the shuttle flew safely again. It was the beginning, but not of the operational life that had been proposed for shuttle.

“What you should understand was that, in 1969, this vehicle [was projected to] have a lifetime of ten years,” Holloway said. “It was designed for fifty flights a year and the cost was going to be $10 million a flight.”

The Space Shuttle flew nine times in 1985, the year of its greatest use. Each flight now costs about $500 million.

“While we were using it, we would be developing the technology base to move on and make it significantly cheaper to come up with a replacement system,” Holloway said. “And none of that happened.”

It’s why he isn’t sad that the shuttle program is ending. “It was never supposed to last this long,” Holloway said.

His sadness comes from knowing that there is nothing ready to take its place.