Back to Top
Home/APPEL News/APPEL News Digest/This Month in NASA History: Gemini XII Made a Spacewalk Look Like a Cakewalk 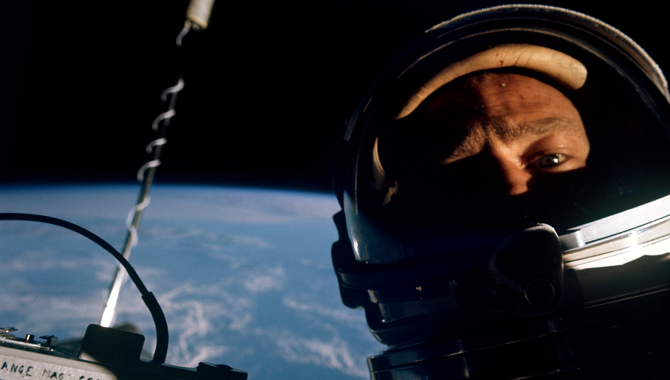 This image of Buzz Aldrin was taken by the astronaut himself during the first of three Gemini XII spacewalks.

Half a century ago this month, the final flight of the Gemini program answered a lingering question—and introduced a training technique that remains invaluable today.

The experimental Mercury program, which featured the first U.S. astronauts in space, and the far-reaching Apollo program, which achieved President Kennedy’s promise of sending humans to the moon and back in the 1960s, were bridged by Project Gemini. A workhorse initiative, Gemini quietly commanded 12 missions—including 10 crewed flights consisting of two astronauts each—that introduced technology and procedures vital to the future of the U.S. space program.

Approved in December 1961, Gemini’s missions flew in 1965 and 1966. The program successfully proved critical new technology, such as powerful space thrusters, onboard computers and radar, and fuel cells used for electrical power. It also established such operational procedures as extravehicular activities (EVAs), rendezvousing with another vehicle, and station-keeping in orbit, in which two vehicles performed maneuvers to remain “in formation” on the same orbital plane.

By the time Gemini XII—the program’s final flight—lifted off on November 11, 1966, the program had already resolved many issues concerning human spaceflight. Still, one question had yet to be answered definitively: could humans effectively work outside the spacecraft, performing important maneuvers and repairs, without inducing life-threatening exhaustion? The first U.S. spacewalk, which lasted 23 minutes, was by Edward H. White during Gemini IV. EVAs were also conducted on the Gemini IX, X, and XI missions. In each case, the astronauts were gravely depleted by their efforts to control body positioning while performing an array of activities. Each found even the simplest extravehicular task difficult to complete.

The crew of Gemini XII—commander James Lovell and pilot Edwin “Buzz” Aldrin—took on the challenge of proving EVAs could be completed effectively. Aldrin, who would perform the spacewalks, followed the same training path as previous Gemini astronauts by taking part in zero-gravity aircraft flights. These were valuable, as they allowed astronauts to experience a microgravity environment and practice actions related to getting in and out of a spacecraft. But they didn’t help with the aspects of EVAs that required slow, deliberate, and ongoing movements—the very movements astronauts had to adopt while working outside the vehicle. As a result, despite their training, the astronauts who reached orbit before Gemini XII were ill-equipped to complete the rigorous tasks ahead.

So Aldrin, a scuba diver, pioneered a new training method: underwater spacewalk simulation. The neutral buoyancy of the underwater training familiarized him with the challenges and techniques needed to move deliberately and effectively in a weightless environment. In addition to the training, the Gemini team greatly increased the number of restraints, handrails, handholds, and rungs to which Aldrin could hook his restraining belt on both the Gemini spacecraft and the Gemini Agena Target Vehicle (GATV), with which Gemini XII would rendezvous on orbit.

On November 11, Gemini XII blasted away from Cape Canaveral on a Titan II rocket. The launch went smoothly. An hour into the flight, however, a problem arose: their radar—needed to locate the GATV, which had launched an hour and a half earlier—stopped functioning reliably. With no other option, the crew had to rely on a manual navigation sighting sextant along with maps and computations to hunt down the other vehicle. Fortunately, this wasn’t a problem for Aldrin: his doctoral thesis had been “Guidance for Manned Orbital Rendezvous,” and he was excited to put his theory into practice. But when they reached the GATV, a second problem emerged: the Agena’s main engine was having trouble, which meant they couldn’t dock and fly the two spacecraft to a higher orbit as planned. Instead, they practiced docking and undocking before photographing an eclipse over South America. It wasn’t the technical exercise they’d anticipated, but it was stunning.

The next day Aldrin performed the first of three planned EVAs. This “stand up” EVA was conducted with the hatch off while Aldrin stood on his seat, his upper body clear of the spacecraft. He completed his tasks with ease, including setting up an ultraviolet camera to image star fields, installing a movie camera, fixing a handrail, and retrieving a micrometeorite experiment. The flawless EVA lasted two hours and twenty minutes.

The second EVA, on November 13, was the real test of Aldrin’s extensive training. Attached to the spacecraft by an “umbilical” cord, he stepped out into space and began his work. The combination of underwater training, multiple restraints and handholds on both vehicles, and a new waist tether paid off: he was able to perform the needed tasks on both the Gemini XII and the GATV without a struggle. He rested periodically, which allowed him to recover between activities, and used the new restraints to position his body in diverse ways that weren’t possible on previous missions. The EVA was a resounding success.

For the final EVA, like the first one, Aldrin stood in his seat on the spacecraft. He discarded unneeded equipment and food containers, knowing they would eventually reenter Earth’s atmosphere and burn up, and took pictures of stars. Altogether, Aldrin spent five and a half hours conducting the Gemini XII spacewalks.

Between the second and third EVAs, Lovell and Aldrin attempted a station-keeping maneuver that the crew of Gemini XI had been unable to complete. The complex gravity gradient maneuver was designed to allow the Gemini spacecraft and the GATV to fly together in the same orbital plane, maintaining a consistent relationship to Earth. After some time getting into position, the maneuver proved successful and the tethered spacecraft floated as planned around the planet.

On November 15, Gemini XII reentered Earth’s atmosphere and landed less than five kilometers from the target location: a fitting ending to a triumphant program. Although never as famous as the Apollo program, Project Gemini served as a critical test bed for equipment and mission procedures that enabled Apollo astronauts to function safely and effectively in space. Through long-duration missions that lasted up to 14 days, Gemini confirmed humans could stay in space long enough to get to the moon and back. The program introduced training practices—including the underwater simulations—adopted by the Apollo crew. Gemini also perfected EVA techniques, pioneered maneuvers needed for one spacecraft to rendezvous and dock with another, and refined reentry and precision landing methods. Finally, Gemini was the first program to use the new Manned Spacecraft Center in Houston, TX, for flight control. By the end of its 12 missions, Project Gemini had accomplished the impossible: its team had made human spaceflight look—almost—easy.